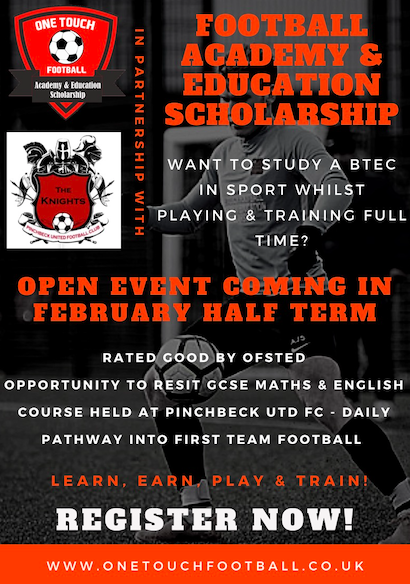 We are delighted to announce that we will be running a Football Academy & Education Scholarship at Pinchbeck Utd FC for the next academic year, starting September 2021.

The course will offer schools leavers that chance to train and play full time with UEFA coaches as well as offering a pathway into their first team.

The education will be delivered by qualified teachers and has been rated Good by Ofsted.

Academy Director said “ Ourselves and the football club look to get this exciting programme running for September and it’s certainly an exciting opportunity for all involved”.

Pinchbeck Utd FC chairman, Gary Coomes said “As Pinchbeck United try and establish their position in the United Counties League it is important that as a club we strive to improve both on and off the pitch. One of the reasons Lewis was brought to the club is his experience at running clubs at a higher level and the tie up with One Touch is something Lewis has helped bring about. Having an educational facility offering the best qualifications for residents of South Holland and beyond gives school leavers a chance locally instead of having to travel. As a club we look forward to working with Glen at One Touch and Lewis for already establishing links.”

Want to find out more then contact Glenn on Glenn@onetouchfootball.co.uk

Scroll back to top